Mid-morning on 13th August, a group of about 26, including children and a couple of dogs, enjoyed a historical walk led by Eleanor MacDougall. The weather was stunning for the purpose, bright and sunny with a gentle breeze. We gathered at the Pottie (in Gaelic Poit-Idhe, meaning Pot of Iona) road-end and walked around the back of the loch to meet the Fidden/Knockvologan road, where we had sandwiches, slices and biscuits, and a welcome drink. Along the way, we stopped and were informed about each location, learning history that spanned the thousands of years from pre-historic times right up to the present day, and Mary Walls and Mary Cameron, the two ladies who lived in the blackhouses towards the end of the route, within living memory. We particularly focused on how the landscape was shaped by the traumatic events of the 19th century.

In the 6th century, Columba and his followers came from Ireland and brought not only Christianity to the West of Scotland, but also literacy, first in Latin and later in Gaelic. Whereas we have to rely on archaeological finds for the previous period, from this point on there were written records.

Eleanor traced the history of the use of the land, from the old run-rig agricultural system to crofting, as it was introduced by the 5th Duke of Argyll in the 19th century. She pointed out the feannagan or 'lazy beds' created by the first crofters and still clearly visible. We saw a standing stone which was erected between 2,500 - 2000 BC, and the remains of an iron-age fort, in use from about 700BC to 400AD. We also saw the memorial stone to Angus MacPhail, erected by his descendants; he set out in 1820 to lead a sheep from Poit-Idhe to Fidden for slaughter, but dropped dead on the way. We learned about various discoveries in the wider area, such as the rock carvings in Scoor Cave, and ancient tools at Ardtun and Ardanalish, amongst other places.

Eleanor gave us vastly more information than this brief summary suggests. If she repeats the walk I can thoroughly recommend it to visitors and locals alike. The whole exercise was a truly worthwhile event, and a beautiful and scenic walk besides, and people were kind enough afterwards to donate a total of £111.50 towards the refurbishment of St. Ernan’s Church at Creich.

A welcome cup of tea and refreshments at the end! 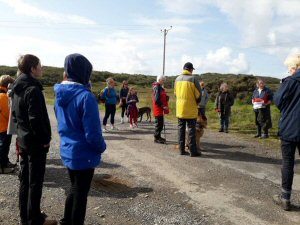 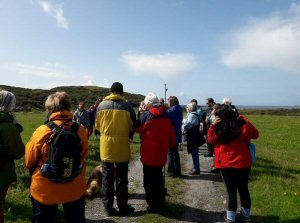 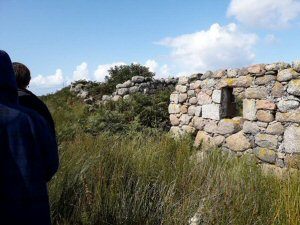 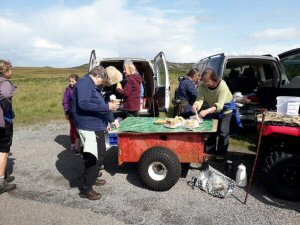 If you would like to see more content on any of the above, please submit your articles to the webmaster for inclusion on the web site. More...